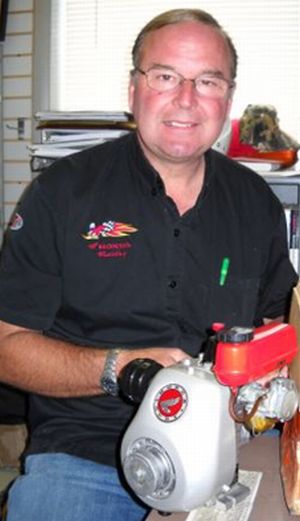 Bob Logue - one of ten siblings - was born in Cascade, Pennsylvania in 1955. When he was nine, his father bought a Honda Trail 90, and kicked in half the price for a Fox minibike for Bob. That's when Bob gained a lasting impression about Hondas. He recalls, “The Fox was always breaking down; the Honda never quit running.” In addition to earning a healthy respect for the Honda brand, Bob formed a lifelong love affair with motorcycles. He says, “There was this long, long hill that went up to my grandparents' place. The day I no longer had to walk up that hill was like heaven. Zipping up it on a motorbike gave me a whole new outlook on life.” Still under ten years of age, Bob decided that one day he would like to be a Honda dealer.

Logue went to Penn State University, and in his final year applied for his student teaching certificate and a Honda dealer franchise at the same time. The dealership came through, and he never graduated. He bought a defunct lumber yard in Williamsport, and opened for business. Bob Logue Motorsports is still in its original location, a fact for which Bob is proud. Commenting on current tough times, Logue says, “We're gonna make it. This place is paid for and we know how to operate lean. I'm glad I am not one of these guys with a huge mortgage for a new million-dollar building facing the freeway.”

Undoubtedly, part of what sustains a good business is its attitude toward the brand. Bob says, “I tried Yamaha personal watercraft for awhile, and once I had a chance to buy out a Harley dealership for $15,000--the cost of the parts inventory--but I've chosen to focus on Honda for a reason. We don't try to divide our loyalties between a bunch of different brands. We do only one thing, and we do it well. That's why our slogan is 'We speak Honda.' It's because we appreciate and believe in Honda quality.”

Bob Logue Motorsports is more than a dealership; it is also a museum. Two rooms are consigned entirely to vintage Hondas and Honda collectibles . . . well, almost entirely. Among the 150 motorcycles on display are a couple of nice Triumphs and a BSA. Bob says, without a hint of malice, “I keep these around to remind me how things changed when Honda introduced a higher standard of quality. These are the victims of continuing to do things the same old way.”

Logue had an opportunity recently to demonstrate Honda's legendary reliability when the Discovery Channel wanted to feature a Honda Cub 50 in its “Seven Wonders of Motorcycles” program. Logue pulled a mint-condition example (pictured here) out of his collection, fired it up, and went for a 25-mile ride with the camera crew through the Pennsylvania mountains along the Susquehanna River.

The most remarkable thing about the Logue collection is that none of the motorcycles are restored. All are in original condition, ranging from good to pristine. For this, Logue gives credit to Myron Schroeder, 87, (pictured below) who has spent endless hours lovingly detailing each machine. Logue says, “Myron comes to work every day, riding here every day on his motorcycle, and spends most of his time bringing vintage Hondas up to showroom standard.”

In addition to the rows of fine motorcycles and cases of memorabilia, one notices giant graphics around the walls of each room. These played a role in Logue's decision to create his museum. He explains, “In 1998, when the Motorcycle Hall of Fame created an exhibit to celebrate the 50th anniversary of Honda, they asked if I would lend them my 450 police bike for the display. I did, and when the exhibit ended and I went to pick up the bike, I saw all these wonderful giant graphic panels they had made for the exhibit.” He continues, “There were 47 in all, and I bought all of them. It was my intention to sell them and make a profit, but on the way back to Pennsylvania I started thinking about keeping them for decoration, and I began to realize that with my collection and these graphics, I had the makings of my own museum.”

We all understand the influence that Honda had on the American motorcycle market, but nothing brings it home like viewing all of the most significant and beloved models all in one place. This is what Bob Logue has provided for all to enjoy, and it is nothing less than the brand deserves. To access the Museum on line, click here. To learn more about Bob Logue Motorsports, click here. To read about Myron Schroeder and his motorcycles, click here. To read our Motohistory Tribute to the 50th anniversary of American Honda, click here.

Editor's Note: This story was originally published at Motohistory.net on August 13, 2010.