The wild world of Don Bradley 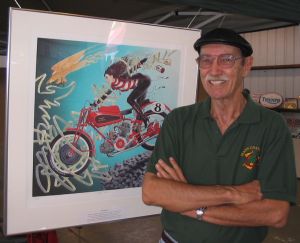 Quality graphics contribute to the prestige of any corporation or special event. A logo, an image, a mascot that captures the imagination and speaks of creativity and style certainly infers those qualities on the entity it promotes. Take for example the Riding Into History Concours d'Elegance, an event at the World Golf Village in St. Augustine, Florida, begun in 2001 that has become one of the most prestigious and well-attended motorcycle concours in the eastern United States. Yes, it's in a classy setting, and it is organized by people who pay great attention to detail, but there is no doubt that its reputation has been incalculably enhanced by the work of graphic artist Don Bradley (pictured right), whose beautiful poster art is like nothing seen before at a gathering for cars or motorcycles.

Don Bradley, born in 1939, grew up in Winter Garden, Florida. His father died of cancer when he was just four, so he was raised only by his mother. He recalls, “We were poor. My mother had to work, so I spent a lot of time alone, but she always had plenty of paper, pencils, and paint for me to entertain myself with.” Bradley adds, “I drew for hours on end, and it became a way for me to bring my fantasy world into reality.” However, as a teenager, Bradley discovered motorcycles, which temporarily pushed his art aside. “I always liked mechanical things,” he explains, “and at about 14 I abandoned the drawing board and really got into motorcycles. I loved riding and wrenching, and I did a little racing, mostly with BSA Gold Stars.” 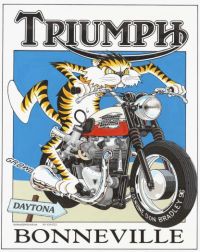 After high school, Bradley went to college and returned to his art. He landed a job as an illustrator and went on to become an art director. When the company where he worked went out of business seven years later, he went to RCA where he became a technical illustrator. He kept his hand in his creative work by freelancing, but by 1980 he was burned out on drawing. He found a ragged old 1952 Vincent Black Shadow, and he was bitten again by the motorcycle bug. He recalls, “I immersed myself in motorcycles. I worked as a salesman and then the sales manager at a thriving Honda dealership, and when a competing Honda dealership came up for sale, I bought it.” In the late 1980s, Bradley sold the business to turn his attention to motorcycle restoration, and again to his art. He explains, “Restoration combined my two loves. For me, creating a painting and restoring an old motorcycles are both works of art. They are just different media.” 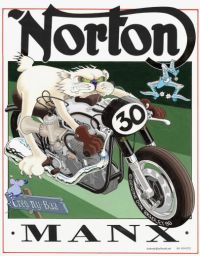 A whole new period in Bradley's work opened when he did some motorcycle t-shirt art for his grandchildren. People reacted positively to the t-shirt, so he began to design others. His designs featured an accurately rendered vintage motorcycle with a cartoon creature onboard—a tiger on a Triumph (above left) or a Manx cat on a Norton Manx (right)—and they had a touch of the crazed quality of Ed Roth's hot rod art of the 1960s, except they were far more refined and impeccably executed. But the t-shirt art evolved from cartoon fantasy into a strange and otherworldly mythology featuring strikingly beautiful women aboard motorcycles. The change came with a wild Vincent-riding woman (pictured below), originally created as t-shirt art, that took on a whole new significance when it was selected as the promotional graphic for the Riding Into History Concours in 2004. 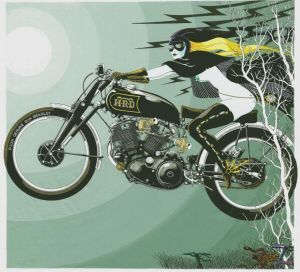 With a positive response to the Vincent woman poster, Bradley launched a new series that brought together the fastidious attention to detail that was required as a technical illustrator at RCA with the wild and otherworldly mythical creatures living in the artist's mind. With his originals executed in one-quarter scale in acrylic on illustration board, Bradley reports that he typically spends six months on a single work. He explains, “I research and study the motorcycle in great detail; its design, its history, and its cultural significance. On the original painting you can see every nut, the threads on bolt, even cotter pins.” But the women who ride these machines are anything but realistic. They are lithe, elegant, elongated, vigorous, curvaceous, overtly sexual, and often intimidating. They are Valkyrie, banshees, temptresses, and sometimes demonic. They are women to die for and women to die from. The result is a shocking contrast between the near-perfect photo realism of the motorcycles and the creatures who ride them.

“The Seven” (pictured right) features a mid-1960s Honda RC174 six-cylinder grand prix machine. Bradley has taken the liberty of removing the fairing so that he can reveal the detail of the engine and chassis. The story in the painting is based on Japanese mythology and literature, featuring the goddess Benten (or Benzai), the only female among the Japanese seven deities. In mythology, Benten selflessly married a dragon in order to protect the Japanese people. Bradley's wild Benten, her nudity only slightly hidden by bit of Samurai armor, has mounted her RC174 to do battle with the dragon, raising her sword in battle. This work was adopted by the Riding Into History Coucours as its 2006 design. 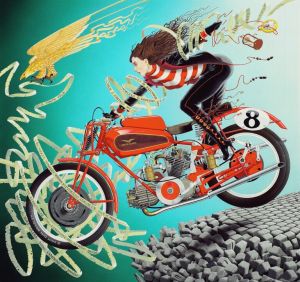 “Time Tangle” (pictured left) depicts a 1947 Moto Guzzi Bicilindrica 500cc racer. The curvaceous woman riding the machine is leaping fearlessly into space as the cobblestones of the real world crumble away under her wheels. She is entangled in a ribbon-like time line that has on it names of great grand prix champions. “Time Tangle” appeared as poster art for the 2007 Riding Into History Concours.

“Katrina” (pictured below right) places a 1916 overhead-cam Cyclone racer before the devastating horrors of nature destroyed. Swirling behind the nearly naked woman aboard the motorcycle is the violent vortex of a hurricane, devolving into a black hole. The rear wheel of the Cyclone shatters the surface of a board track as the machine leaps into space. “Katrina” became the poster art for the 2008 Concours. 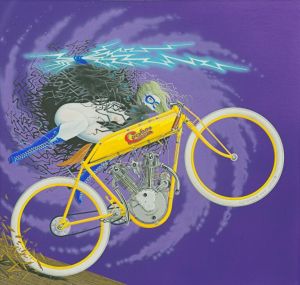 Drawing from the well-know verse from the Book of Revelation, “Behold a Pale Horse” [And I looked, and behold a pale horse, and his name that sat on him was Death, and hell followed] (not pictured here) may be Bradley's darkest work yet. Death, as a woman, is astride a 1937 Harley-Davidson Knucklehead on rocky terrain. Skulls hang from her tunic and beside her is a road marker pointing to the River Styx, which souls must cross to enter the underworld.

“Blue Angel” (not pictured here) features a beautiful woman reminiscent of Marlene Dietrich, the German actress who gained international fame through her performance in the 1930 motion picture “Blue Angel.” She is astride a 1929 BMW R11, wearing only a head scarf, white gloves, white panties, and white silk stockings. A sign pointing toward “Luft Rennen” indicates she is on the way to the air races, reminding us that BMW was once a leading aircraft engine manufacturer. Above her in the sky are bird-like fantasy air racers. There are BMW and NSU logos on the wings of two of the aircraft. “Blue Angel” was featured at the 2005 Riding Into History Concours.

This year's signature art for the 2012 Riding Into History Concours—the theme of which is Japanese motorcycles--features a female Japanese archer aboard Wayne Rainey’s Superbike National Championship Kawasaki (pictured left).

Bradley has also created original art for the Cycle World Rolling Concours, and his work has appeared in major galleries, including the Norton Gallery in West Palm Beach, Florida. He counts among his influences the Russian artist Romain de Tirtoff who worked under the name Erte, the American magazine illustrator J.C. Leyendecker, and the Brandywine school of painters. Giclee prints of Bradley's motorcycle posters have been produced in limited editons of 100, and are available for $475 each, except “Black Lightning” and “Pale Horse” which are available for $375 and $275, respectively. His signed caricatures on 12x17-inch heavy stock are available for $50 each. For more information about Don Bradley's art, click here.  For information about the Riding into History Concours, click here. 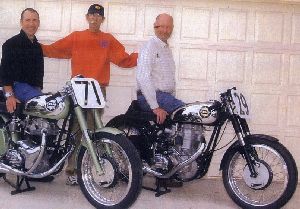 Editor's Note: Don Bradley has been featured also at the Motohistory.net web site in regard to his motorcycle restoration work. For over two years, Bradley and his friends restored a pair of BSAs in celebration of the 50th anniversary of BSA's remarkable five-place sweep of the Daytona 200 in 1954. Pictured here are Myles Raymond (left), Bradley, and Nick Simpson (right) with the motorcycles, which were featured in an exhibit at the Motorcycle Hall of Fame Museum in 2004, and have since been exhibited internationally. To read about the BSA restoration project in which Bradley was involved, click here. This story was updated from a feature about Don Bradley published originally at Motohistory.net on April 30, 2009.