Jack and Judie Wells: On Wings and Wheels 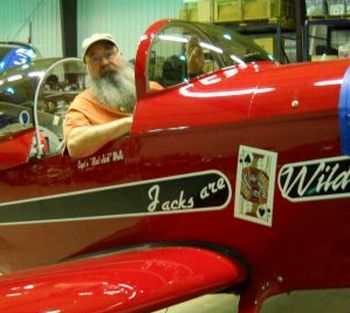 After a full life of hard work, Jack and Judie Wells are retired and homeless.

Well, not exactly. They live in a 75x100-foot hangar at Cannon Creek Air Park, just north of Gainesville, Florida. It’s what you have to do when you need to take care of four airplanes and more than a hundred motorcycles. About this unusual state of affairs, Jack acknowledges, “We’ve all got our addictions.” But don’t feel too sorry for them. A quarter of their hangar is outfitted as an apartment with all the comforts of home, and nearby a new house is under construction. Not that they couldn’t get along just fine as they are, but now there are only two—a 1948 Navion (pictured here) and a Vans RV8—of the four aircraft housed in the hangar, and it would always be nice to have room for a few dozen more motorcycles.

Jack is known for his collection of vintage BMWs, but he is certainly not a one-brand kind of guy. There are also three Broughs, two Vincents, three Indians, four Sunbeams, an Ariel Square Four, and a Velocette Venom V-Line. Then there are those bikes you don’t see just everyday, like a Maico Taifun, an NSU Max, a Neracar, a Lilac, an Adler, and an Abingdon King Dick. And among this sea of motorcycles, you can even occasionally run across a cool scooter, such as a Maicomobile or a Fuji Rabbit. 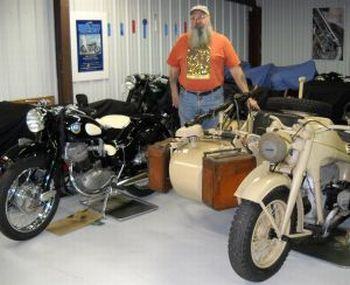 One might quickly get the idea that Jack Wells likes owning motorcycles more than riding them, but he would be wrong. Jack and Judie have ridden a sidecar rig in every country in the Americas, from Prudhoe Bay to Tierra del Fuego, except for Colombia. They could have ridden there as well, but they approached the frontier at a particular hot spot, and decided they didn’t want to be shot at. They also have ridden in Australia and Hawaii. Judie has logged over 200,000 miles in the saddle of her own motorcycles, and Jack has compiled 700,000. They have also participated in the Three Flags Classic five times, and three of those were in connection with four-corners tours. But Jack admits, “This antique motorcycle thing has really cut into my motorcycling. I spend so much time now hauling my bikes to meets and attending air shows that I don’t get much time to ride.” Still, their extensive travels can be seen in the stickers on the windscreens and bags of their adventure bikes.

Jack Wells was born on Long Island, New York, in August, 1942, and grew up in Sparta, New Jersey. His first motorcycle was a Cushman scooter with an ice cream box on the front, which he bought for five dollars and kept hidden from his parents. He admits that he was pretty much a scholastic wash-out, stating, “I spent all of my time in machine shop and wouldn’t attend regular classes, so I flunked my freshman year of high school. I wanted to know about things that run, and I couldn’t see the point of English or history.” That performance convinced his father to ship him off to Riverside Military Academy in Gainesville, Georgia, where his first year wasn’t much better. He recalls, “I spent most of my available time working off demerits.” He adds, “I finally got it through my head that this wasn’t the easiest way to do things, so I got serious in my second year.” Wells graduated from the Academy in 1961 as a Cadet Officer and member of the Honor Society.

Wells wanted to go straight to the military, but his mother insisted he get at least two years of college, which he completed at Tusculum College in Greenville, Tennessee. He says, “I needed 60 credits and earned 65. I probably could have had six or eight more, except I refused to attend chapel.” Flying had always been prominent in Jack’s family—his father was a TWA pilot and one of the first to fly international routes—so upon graduation from Tusculum, Jack joined the Navy, where he learned to fly T34s and T28s at Pensacola. This proved to be his true calling, and after the Navy he quickly earned private and commercial licenses, flight instructor credentials, and qualified to fly DC-8s and eventually heavies, such as the Airbus. Jack flew for several charter freight lines, and for awhile dodged small arms fire while flying cargo and troops into Vietnam. He spent the last years of his career with American, retiring in 2002 after 34 years of service on the flight deck.

Jack and Judie, who was a friend of Jack’s sister, had known each other since she was five and he was six. He says, “I was always doing things with Judie. She was a lifeguard and I had a boat, so we became water and snow skiing partners, depending on the season. However, there were no romantic inclinations until after I completed military school.” They were married in 1966 and raised two children, Wendie and John, who is also a commercial pilot. They got a BMW R60 with Steib sidecar, and later Judi got her own BMW K75 police special. For their adventure riding they outfitted a 1984 BMW RT with Earls forks and Ural sidecar. The vintage motorcycle bug bit in 1974 when Jack ran across a Dover White BMW R26 in Phoenix that was on its way to the landfill. He says, “It was really rough, but I knew it was too good to throw away, so I had it loaded on an airplane as luggage and took it home.” For a long time, Jack’s fascination for the little BMW singles governed his collecting. Today, he has virtually all of them—from the R2 to the R27—except for the exceptionally rare R39, built from 1925 through 1929. But once he had acquired most of the singles, he branched out into BMW boxer twins, military motorcycles, and finally to other brands. 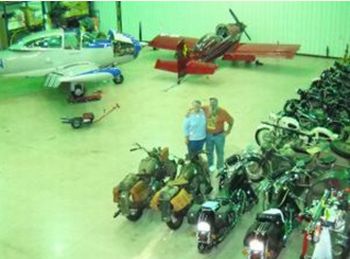 Now his nine BMW singles are only a fragment of his motorcycle collection. His rare Wehrmacht Zundapp with sidecar and armament has been featured in the Guggenheim’s Art of the Motorcycle Exhibition twice, and it, along with his Harley WLA, Harley XA, Indian 841, and BMW R75 with ammo trailer are in demand at military shows all over the nation. To meet this demand, he has acquired a big diesel truck to pull his 30-motorcycle trailer to various motorcycles to antique meets from coast to coast. He is a member of two Antique Motorcycle Club of America chapters, and an AMCA Field Judge. In addition, he is Chapter 977 President for the Experimental Aircraft Association and a regional director for both the Veteran Motorcycle Club of America and the Vintage BMW Club. In all, Jack belongs to six motorcycle clubs in America and six in England and Europe. Any given month, his desk calendar contains more writing than white space, and when they’re not on the road, Jack and Judie are entertaining flying and riding friends at their hangar/home. Jack thought he was pretty busy when he was flying aircraft all over the world, but he admits that he didn’t know what busy was until he and Judie decided to enjoy their retirement on wings and wheels.

Editor's Note: This story was originally published at Motohistory.net on January 21, 2010.