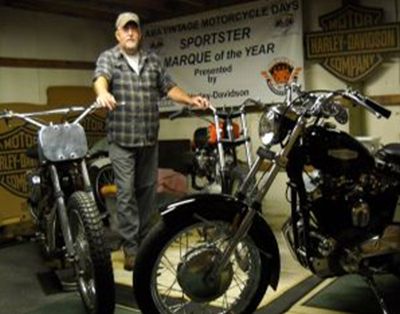 In late June, 2009, Harley-Davidson patriarch and design guru Willie G. Davidson was honored with a lifetime achievement award by Eyes on Design, a professional society that promotes and recognizes outstanding achievement in vehicle design. Until now, it had been exclusively a club of car guys, but no longer once Davidson became the first motorcycle stylist to be so recognized by the organization. As a backdrop for this historic ceremony, 25 superb examples of more than a century of Harley-Davidson products were placed on display. Two of these—a 1972 XLCH Sportster (pictured below) and a 1972 XR750 dirt tracker—belonged to Jim Oldiges of Erie, Michigan. Just days before the Eyes on Design ceremony, the XR750 had earned the paramount status of “Winner's Circle” motorcycle in Antique Motorcycle Club of America judging at Rhinebeck, New York. Earning 99.75 points against a perfect score of 100, the motorcycle is unimpeachable in its quality, correctness, and attention to detail. It also won first in its class at Gilmore in 2007 and was named “most unique” at the AMCA meet at Oley in 2009. About its near-perfect score, the AMCA judge who informed Oldiges of his achievement added, “And nobody gets a hundred, don't you know!”

Jim Oldiges (pictured above) was born in Toldeo, Ohio in 1956 and graduated from Toledo Central High School in 1974. Prior to graduation he had already signed up for the Marines, which he served until the end of 1980, followed by another two years in the active reserves. 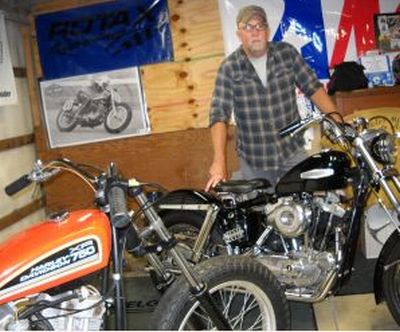 Oldiges is among the generation that was so profoundly influenced by the products of Soichiro Honda. When he was only five, a neighbor bought a Honda Dream and offered him a ride. Oldiges recalls, “I badgered my father until he let me do it, and with that first ride I was addicted. From that moment on, motorcycles would be an important part of my life.” In the Marines, Oldiges worked in Artillery and Transport, he did a tour of the West Pacific, then was stationed at Twenty-Nine Palms in California. There he got into the So-Cal off-road racing scene. He explains, “On the weekends we would take our dirt bikes out to the Mojave and race the civilians.”

Returning to Ohio, Oldiges got a job as a heavy equipment mechanic then moved into the tree and lawn maintenance business. He says, “I liked to climb, which many tree trimmers won't do, so I was able to get a lot of well-paying specialty tree work.” Oldiges had already learned about landscaping and lawn maintenance when he worked at Toledo's Sylvania Country Club during high school. Recalling those years, he laughs, “I got to see Palmer and Nicholas play in 1970 and 1971, and I really put it to those guys. I had the greens mowed so close that they complained is was like putting on concrete.”

While building up his tree trimming and landscaping business during the late-1970s, Oldiges got into building, restoring, and customizing muscle cars. Through this activity he learned the skills of metal working, painting, and attention to detail. But he continued to ride motorcycles, and eventually they displaced his interest in cars. He explains, “I finally got burned out with muscle cars. During the 1980s it became kind of a cookie cutter business, and I got bored with it.” “But I also figured out what so many others have,” he adds, “which is that you can have a lot more motorcycles than cars for the same space and with the same money.”

Oldiges' collecting gravitated toward Harley-Davidsons, which are the core of his collection still today. Over the years he has owned seven of the MX250 motocross bikes, dozens of CR, CRS, and ERS Sprints, ten XR750s, and even two or the rare RR250 Aermacchi road racers. Current builds include a 1968 XLR (#8 of only 15 built that year) (pictured above right) and a 1980 XR750 (pictured below left). About the current XR750 restoration he says, “There's a lot to work with. The engine was once installed in a hillclimbing chassis where it got very light use, so this is a nearly new motorcycle that has never seen duty on a dirt track.” Whether it will ever match his 99.75-point 1972 still remains to be seen.

Oldiges' wife Tina and teenage twin daughters, Jessica and Jennifer, are as dedicated to motorcycles as he is. Tina has her own rider—a 2001 Jade Green 883 that Jim presented her on her 40th birthday—the girls cut their teeth on a 1971 Indian mini-cycle, and extensive travel to vintage bike meets around the country is still usually a family affair. Oldiges also has his own modern rider, a 100th Anniversary XL1200 Custom Sportster. About this bike, which is maintained as well as any of his prized collectibles, Oldiges says, “I was in the Marines when the Harley Bicentennial Editions came out, and I really wanted one. It didn't work out, so I swore that one day I would get another special edition. It only took me about 25 years to fulfill that dream.” 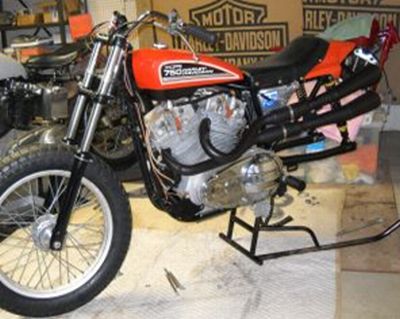 Not surprisingly, Oldiges' meticulous restorations have not gone unnoticed by the many museums that are assembling motorcycle exhibits these days. At present, he has an authentic Terry Poovey Harley-Davidson—with engine built to full racing spec by Teddy Poovey—at the Motorcycle Hall of Fame Museum in Pickertingon, Ohio, and his near-perfect XR750 used for Willie G's Eyes on Design ceremony is now on display in the foyer of the Antique Automobile Club of America Museum in Hershey, Pennsylvania (pictured right). In addition, at the Harley-Davidson Museum in Milwaukee there are two Oldiges machines, a 1972 Sprint ERS and a 1974 SR100 Baja.

As for how Oldiges affords his hobby, consider the fact that at age 53 he commands a good fee because he is still an active tree climber in a trade where skill and courage have been almost entirely replaced by trucks and buckets. So who says motorcycles don't keep you young at heart?