The motorcycles that changed everything 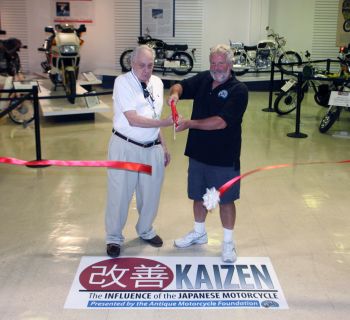 On the evening of September 6, 2012, Jerry Doering, Chairman of the Gerald A. Doering Foundation, and Dennis Craig, President of the Antique Motorcycle Foundation cut the ribbon that opened “Kaizen: The Influence of the Japanese Motorcycle” at the Motorcyclepedia Museum in Newburgh, New York. It is the first exhibit to be assembled at a major American motorcycle museum about the motorcycles that revolutionized the motorcycle industry: the Japanese motorcycles of the 1960s and ‘70s.

The Japanese word “Kaizen” means “beneficial change,” but in post-war Japan, it was more than just a word. It was also a philosophy of work and manufacturing that became the key to the quality and innovative design that enabled Japanese brands to penetrate, then quickly dominate international markets with products built to a higher standard. Under the principles of Kaizen, every worker was encouraged to identify small changes that would reduce waste in a war-torn nation where essential resources were in short supply. It was soon realized that the by-products of the relentless drive to reduce waste were improved quality and efficiency. Many of the concepts practiced by the Japanese became components of a worldwide manufacturing revolution that became known as “Total Quality Management,” but only after the Japanese proved by dominating markets that they had learned a better way. 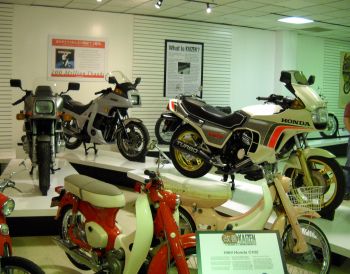 The practice of Kaizen not only enabled the Japanese to become dominant in the American motorcycle market, but it resulted in “beneficial change” to the motorcycle industry as a whole when the market became larger, reached a broader range of customers, generated more profit, and improved the public opinion of motorcycling in America. Consequently, Kaizen, the exhibit, is more than an exhibit to celebrate the beauty and technology of Japanese motorcycles. It also celebrates the philosophy that altered and benefited the worldwide motorcycle industry.

Kaizen will run through August 2013. It contains 45 motorcycles plus artifacts, posters, and giant graphics of advertisements of the period from the late 1950's through 1980.

Motorcyclepedia, which opened in April 2011, contains more than 400 motorcycles and memorabilia displayed over 85,000 square feet of floor space, placing it among the leading motorcycle museum in the nation. It contains a diverse array of motorcycles and artifacts, including the largest single collection of Indian motorcycles anywhere, a large collection of 1960s and ‘70s customs, military and police motorcycles, and periodically changing exhibits sponsored by the Antique Motorcycle Foundation.

Nostalgia and the Japanese motorcycle

From the birth of the American motorcycle industry, circa 1900, through 1960, sales amounted to no more than about 50,000 motorcycles a year. The arrival of the Japanese brands, combined with the youthful Baby Boomers and a growing post-war economy, drove sales sharply upward, reaching an all-time high of 1.5 million in 1974.

A second sales boom came 35 years later when these original customers moved toward retirement and became nostalgic about the fond memories of their youth. Those memories, of course, included the Japanese motorcycles on which they learned to ride.

It was anticipated that the key appeal of Kaizen would be nostalgia. Below are three promotional releases distributed before the opening of the exhibit, all playing to the nostalgia of Baby Boomers.

The bikes that tripped your teenage trigger 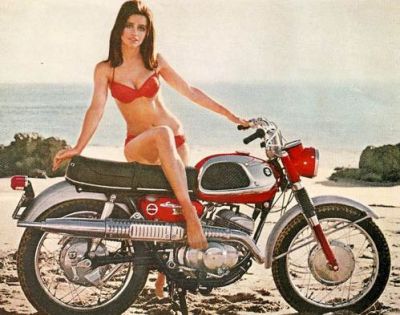 Remember those early Japanese bikes that tripped your teenage trigger? The ones that put so many of us on the motorcycle road for the rest of our lives? What did you really want, that motorcycle, or the attention it would get you? It didn’t matter, both were good. Impressing the girl, feeling the wind, making memories.

Some of us didn’t stay on the motorcycle road. We left to get an education, defend the country, get married, raise kids, pursue a career, whatever. Many of us returned later, when we had more time, more money, and usually a larger belt size, answering the pangs of nostalgia.
And some of us didn’t return, but really wish we had.

Don’t worry, the Motorcyclepedia Museum will give you your nostalgia fix with Kaizen, the first exhibit in America dedicated exclusively to classic Japanese motorcycles. “Kaizen” is a Japanese word that means “beneficial change.” It is also the business philosophy of constant incremental improvement that enabled the Japanese to revolutionize the world motorcycle market.

So join us, as we travel back to see the bikes you had and the ones you wish you had; the ones that gave you memories of a lifetime.

Or how about 1965, when those little Honda step-throughs were everywhere? Now you could get a motorcycle, because your mother was not afraid of it. Heck, your mother even wanted one herself.

Cool thing about those little Japanese bikes is that they grew up, right along with you. They got bigger and faster, and a lot sexier. By the time the Suzuki Hustler or the Kawasaki Triple arrived, those tough guys on Brit bikes were no longer pulling up beside you at red lights. Then came the Honda Four and next the Kawasaki Z1. Fahgeddaboudit!

You know where you were in ’72, and sometimes you wish you were still there. Don’t worry, the Motorcyclepedia Museum will take you there with Kaizen, the first exhibit in America dedicated exclusively to classic Japanese motorcycles. “Kaizen” is a Japanese word that means “beneficial change.” It is also the business philosophy of constant incremental improvement that enabled the Japanese to revolutionize the world motorcycle market.

So join us, as we travel back to ’72 and earlier to see the bikes you had and the ones you wish you had.

What happened to "all the nice people?" 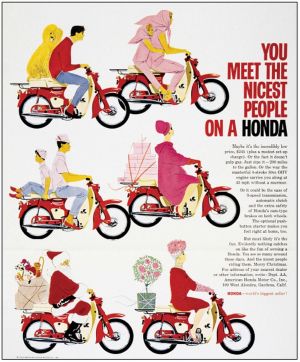 During the 1960s, Honda planted its brand in America with the slogan, “You meet the nicest people on a Honda.” It was an advertising campaign like no other ever seen in the motorcycle industry, and it flew in the face of the negative opinion that most Americans had about people who ride motorcycles.

Honda’s products were also unlike anything previously seen in American motorcycle dealerships. They, and other Japanese brands, brought new standards of quality and ease of operation that made many Americans take a fresh look at owning a motorcycle.

By following a new path, the Japanese brands brought in new customers, and by 1974 had driven sales to an all-time high of more than 1,500,000 units a year. They created a flood of enthusiasm for motorcycling that benefited all brands, provided they were willing to learn the lessons of product improvement and quality control. It was a phenomenon described by the Japanese word “Kaizen,” meaning “beneficial change.”

But what happened to all those nice people?

They’re still here, and many are still riding Japanese motorcycles in addition to Harleys, Ducatis, BMWs, Triumphs, and on and on. The Japanese not only created a bigger market; they set higher quality standards that have kept men and women aboard motorcycles as they aged, matured, and adopted higher expectations for safety and comfort.

← Back to Museum Exhibits